Don’t let Tyson Fury’s lack of a bodybuilder physique fool you: the Gypsy King is as regimented as they come when it comes to nutrition, not just during fight camp but all year round.

‘Look at me, you lost to a fat man,’ he famously gloated, goading Wladimir Klitschko after dethroning the long-standing champion in 2015. But Fury is anything other than a ‘fat man’ – he’s an elite athlete whose diet is controlled to the nth degree.

In fact, nutritionist George Lockhart, who was drafted into the team prior to Fury’s second bout against Deontay Wilder – which he won by stoppage – insists the heavyweight champion’s idea of a cheat meal is a can of diet coke every month or so.

‘He’ll joke about a lot of things, but I’ll tell you Tyson has one of the strongest understandings of nutrition of any of the athletes I’ve worked with, Lockhart – who previously partnered with Conor McGregor – told Sportsmail.

Fury, who fights Dillian Whyte in front of 94,000 fans at Wembley Stadium on Saturday, can regularly be heard passing on nutritional information at the dinner table, such is his interest in food. But Lockhart – who makes anything and everything Fury eats – is the icing on the cake.

Lockhart flew into the UK on January 7 and has fed not only Fury but his father John, brother Tommy, training partner Joseph Parker and coach SugarHill Steward throughout camp – an ‘army’, as he calls it. 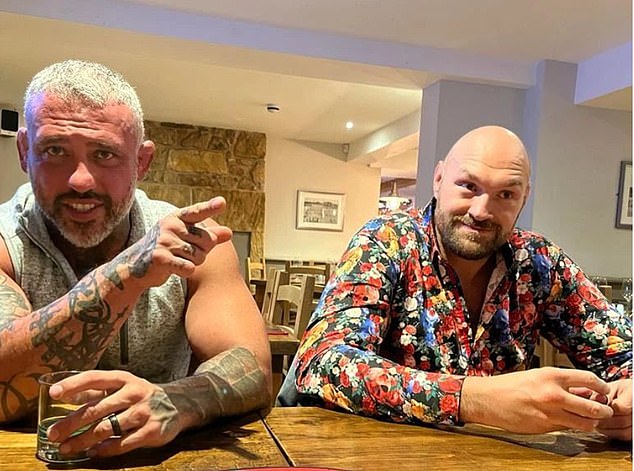 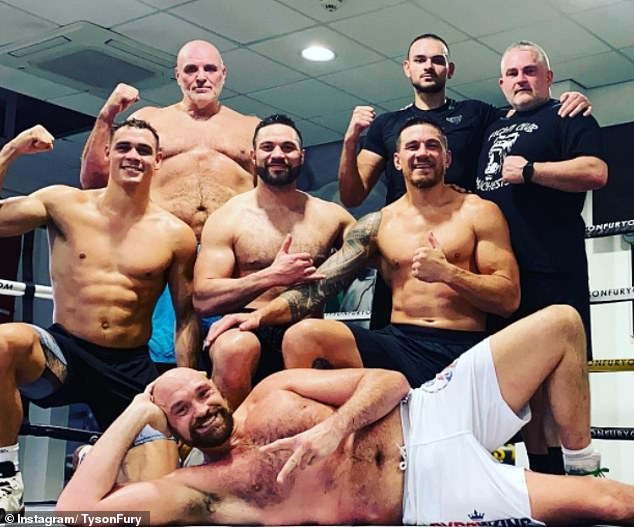 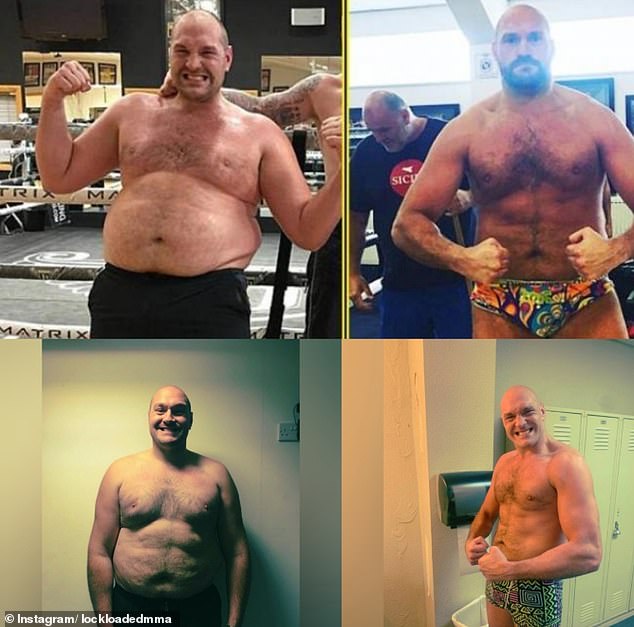 The four meals each day – though varying in terms of portion size – are the same for all of the camp house members, aside from Tommy, who eats an extra meal at 8pm. They’re also given pre and intra oat shakes for both training sessions.

And crucially, there are no days off: this is seven days a week, every week during camp. ‘There’s never a good time to put s*** fuel in a Lamborghini,’ as Lockhart says.

But what exactly does Lockhart use to fuel the 6ft 9in heavyweight? Surprisingly, not that much.

Fury eats between 3,200 and 3,400 calories per day, with his protein, carb, fat and sugar intake tailored daily.

‘A lot of people are shocked about this,’ Lockhart said, insisting Fury is not in a calorie deficit. ‘People think he should be eating way more.

‘He’s feeling great, he’s recovering quickly. That was a shocker for me, for a 6ft 9 heavyweight that’s highly active – I expected more as well.’ 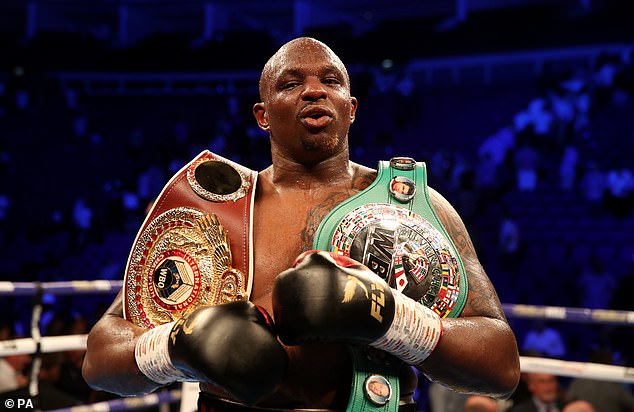 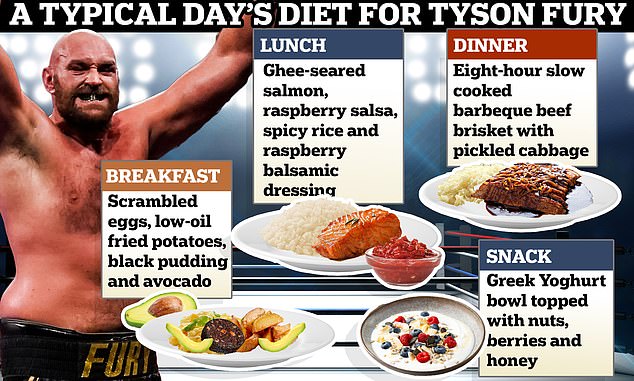 For breakfast, Fury starts off with with a full English… of sorts. It’s not quite the full English you’d find at your local Wetherspoons.

Rather, there’s a healthy serving of eggs, which Lockhart says are one of the best digestive proteins, loaded with nutrients.

Completing the dish is a fruit or vegetable, an example being avocado, and Lockhart’s personal favourite, black pudding.

The traditional English breakfast food is heavy in barley, iron and ultimately protein. ‘It’s so good for the body,’ he says. 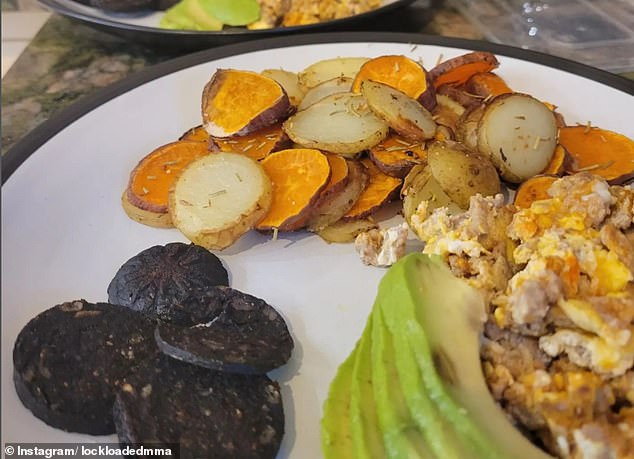 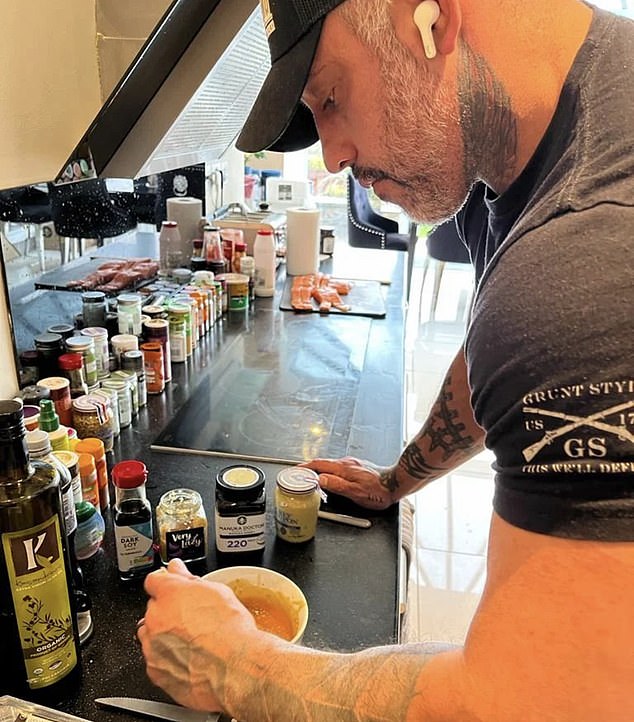 Lockhart prepares the meal for 8am, before Fury goes off for his first session of the day

Fury will also be given a loaded Greek yoghurt bowl each and every day, which Lockhart swears by, giving it to almost every fighter he works with.

The bowl, which can also use kefir – a fermented milk drink – as a base, is loaded with blackberries, raspberries and blueberries, as well as nuts.

This, Lockhart explains, is good for the gut, low in calories and high in calcium. The berries are also high in antioxidants, which can help prevent diseases such as heart issues and certain cancers.

There is then a further addition, however, which Lockhart uses in pretty much everything he makes. This is honey from Manuka Doctor, who he has partnered with ahead of the fight.

‘I use it for everything,’ Lockhart says. ‘The coffee, the meals, the bowls. It helps out with digestion. A lot of people don’t actually look at the ability to absorb food.’ 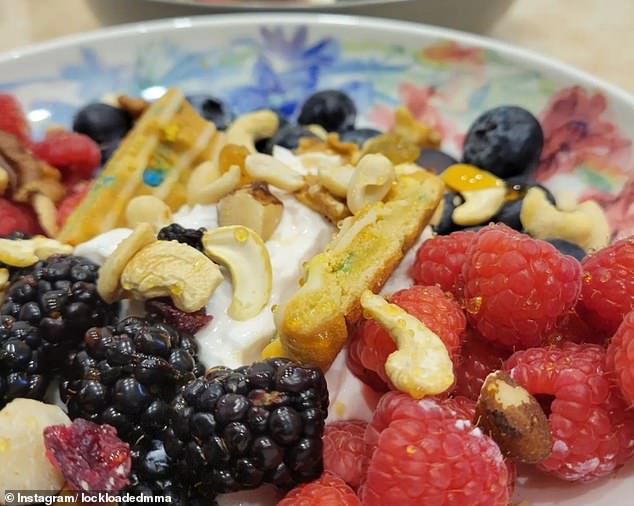 Fury will have at least one Greek yoghurt bowl per day, topped with fruits, nuts and honey 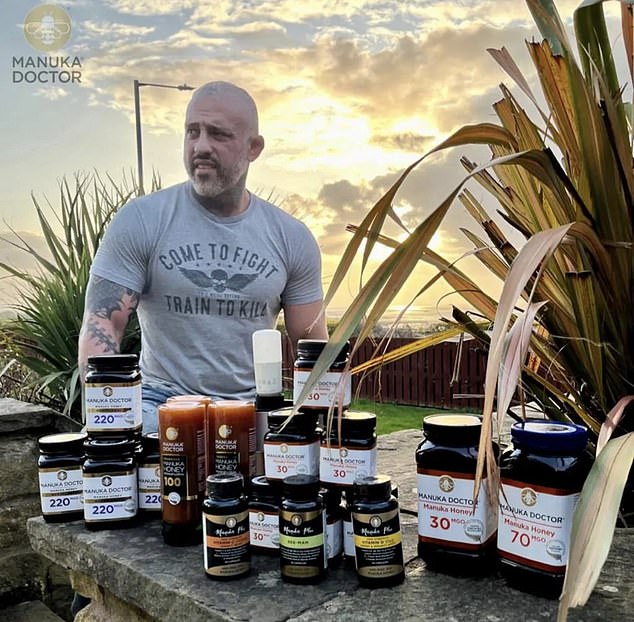 Moving on to lunch, which Lockhart has prepared and ready for when Fury returns from his first workout of the day.

This varies day-to-day, significantly more than his breakfast and snack will. However, Lockhart ensures the Gypsy King gets at least one meal containing salmon each day. This is to get in plenty of Omega-3s, which help with brain function, reduce the risk of heart disease and more.

And, certainly when Lockhart makes it, the meal both looks and sounds delicious. An example of a meal Fury has enjoyed throughout camp is Ghee-seared salmon with raspberry salsa and spicy rice, topped with raspberry balsamic. Not bad.

‘Here in the UK, you guys have these pans which don’t need oil whatsoever. You get everything crispy. In the US, they’re non-stick, but they still stick – you’ve still got to put some oil in.

‘I make them a tonne of fries all the time, it’s very low oil and the oil we do use is Kasandrinos, which comes straight from Greece and it’s the best stuff out there.’

An alternative is buffalo chicken with spinach, tomatoes, chili beans, feta and avocado. 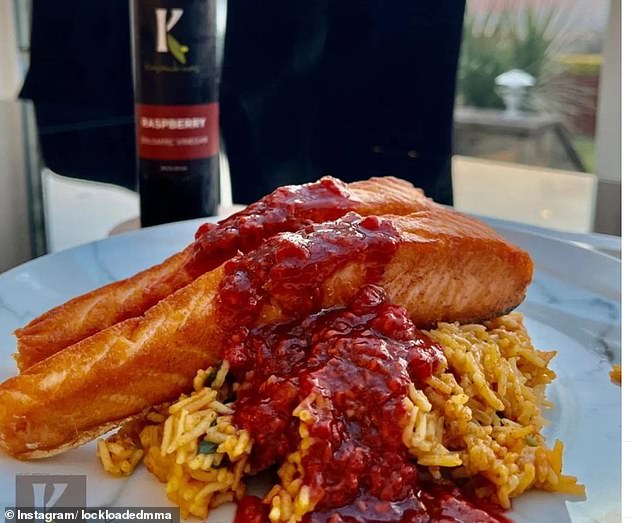 Fury has at least one salmon dish per day, with Lockhart accompanying it with raspberry salsa, spicy rice and raspberry balsamic in this dish 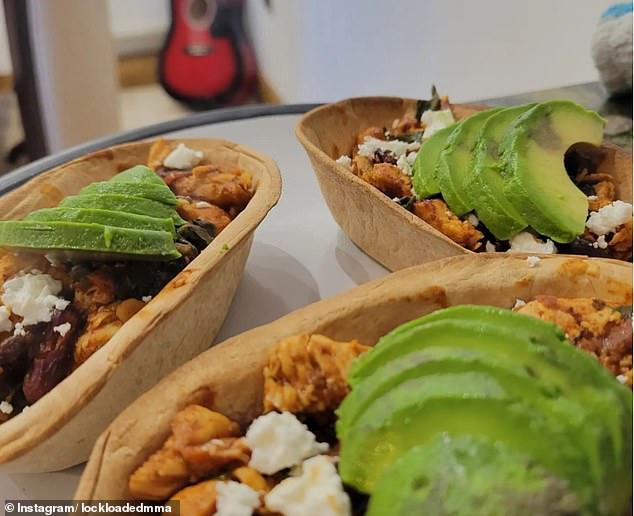 Another option is a chicken bowl with spinach, tomatoes, chili beans, feta and avocado.

Lockhart prefers to feed Fury red meat, however. In fact, he ensures the Gypsy King eats it in at least one meal per day, insisting it’s good for strength.

‘It’s very nutrient dense,’ Lockhart explained. ‘A lot of people look at chicken, they think it’s healthier but its not as nutrient dense.

‘Red meat, it takes longer to digest [than chicken], 100 per cent. That doesn’t mean it’s not as healthy.’

For dinner, again there are numerous recipes Lockhart uses to get in Fury’s daily fix of red meat. An example is eight-hour slow cooked barbeque beef brisket with pickled cabbage.

Lockhart reveals that all the meals he prepares are high in sodium, which would typically be deemed unhealthy by the wider public.

‘Tyson’s sweating constantly and he’s drinking a tonne of water,’ he said. ‘What people don’t realise is that drinking a lot of water is the best way to dehydrate someone. It flushes out the nutrients. Your body wants to stay in a constant state of homeostasis.’

He added: ‘A lot of people look at salt as a really bad thing. Your body needs salt to contract the nerve endings. They need potassium, they need sodium.

‘A lot of studies have shown that sodium creates high blood pressure. But its not necessarily the high sodium but the lack of potassium. People need salt to hydrate.’ 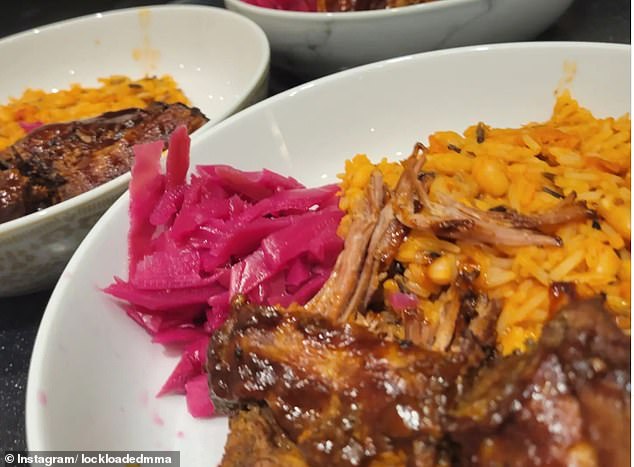 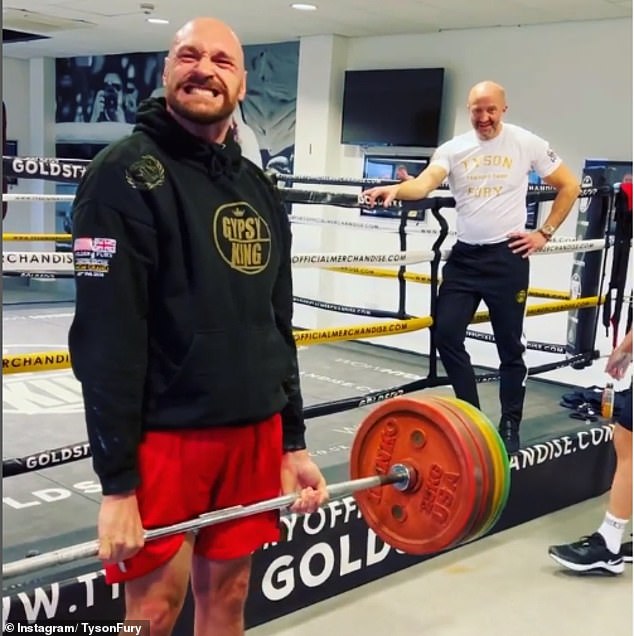 Fury’s food contains a lot of salt, due to the amount of sweat he produces while working out

In terms of what Fury drinks, it’s pretty basic. The Gypsy King likes a coffee – in fact, Lockhart describes him as a ‘connoisseur’ of the hot drink.

Not included in those six litres are the four shakes – also loaded with salt – which Fury has each day as a minimum. They change in volume and make-up depending on what sessions lie ahead.

Interestingly, what separates Fury from other athletes is how he actually processes the food. While Fury is given a high-sodium diet and shakes throughout the day, Lockhart says he could still perform without any of it – for a while, anyway. He references a challenge undertaken last year, where Fury lost 30lbs in just 30 days.

‘Most guys that I work with, they’ll do a lifting session and the next day they’ll be lighter. Tyson will actually be heavier,’ he said.

‘Tyson’s more fat adaptive than he is carb adaptive; most fighters are more carb adaptive. When we did the 30lbs in 30 days, it was crazy, he could fast for two days and then do 20 rounds.

‘Everyone in the gym would be like, “bro, we’re done.” And he’d want to do more. It shows that he’s fat adaptive, he can keep going.

‘For someone who is more carb-adaptive, they’ll look like a bodybuilder, once they’re low on carbs they’ll be getting the shakes, their mind is gone, they’re gone.’

‘He’s got a huge aerobic capacity,’ he continued. That’s one of the many things Tyson has in his arsenal. He really is one of a kind.’

Sat Apr 23 , 2022
A little bit of political theater previous 7 days by Texas Governor Greg Abbott is enjoying out at the detriment of small regional companies and individuals. All could see a shortage of goods or increases in create selling prices in excess of the coming months since of it. On April […]